Dynamics AX Retail: how to automate processes and interfaces in a combined way

In this blog post I’ll boil the necessary standard AX ingredients into a configuration which allows you to reach this goal. I’ll also show you how to leverage this configuration to completely automate the following example flows:

Below you find an overview of the example scenario for this blog post with the 3 flows mentioned – I highlighted the manual and automated tasks in blue/red respectively and painted processes and interfaces as solid lines/dotted lines respectively. 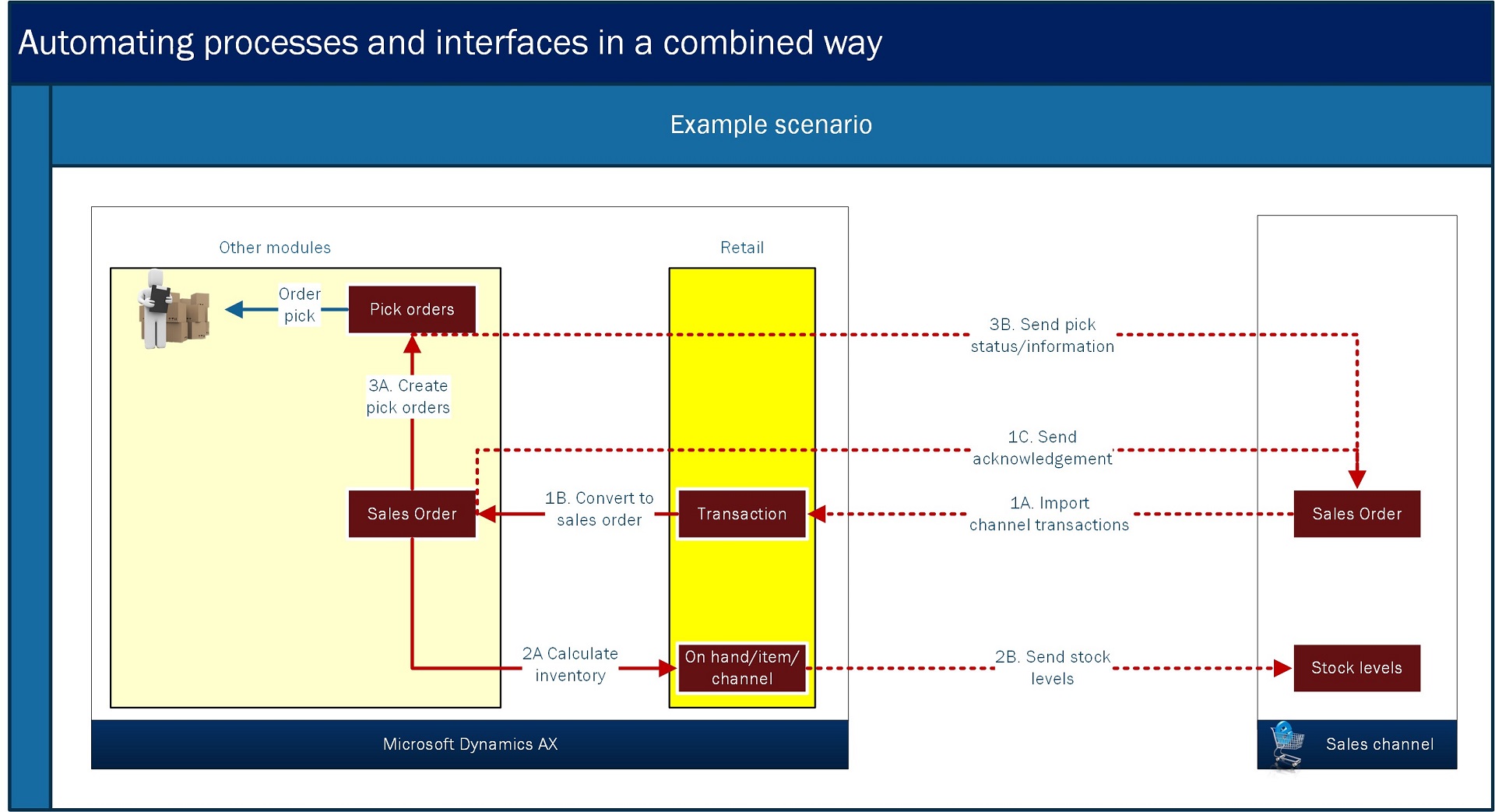 In this particular example, the (3rd party) sales channel has some specific requirements:

The ones of you with AX/Retail background will probably recognize how the different tasks in the example scenario can be supported by standard AX/Retail batch jobs:

Important to notice here on the side is that both the Synchronize online orders batch job as well as the Picking workbench will try to reserve items automatically, independent from the settings in the Accounts Receivable parameters (> General > Sales > Reservation) which might be on Manual. For this reason, and for the reason that picking will be tied to one specific point of time (for example 7AM),  as opposed to the other batch tasks which will run periodically throughout the day, the 3 different ‘flows’ (combinations of business event and interface) are to be scheduled in their own frequency. This also provides the opportunity for an order manager to allocate additional on hand stock to fulfill open order requirements which failed to claim stock at import before the picking workbench runs automatically.

So… from helicopter perspective AX has a pretty good coverage, right? But we need to bundle the automated tasks in 3 groups which can be scheduled in their own frequency, instead of having to manage 7 batch jobs which are to be aligned in timing individually. How do we organize that?

From the requirements stated above we can distill that we need the following configuration:

Point 4 can be covered by defining new or updated Distribution schedules supported by new or updated scheduler job definitions. As an example for element 3A (Send pick status/information) of the example scenario above:

The difficulty in is point 3. For being able to schedule the batch jobs as separate batch tasks under the umbrella of one batch job, three things need to be arranged:

Note: if this method is not added or returns FALSE, the batch class is simply not selectable as batch task under a batch job.
Note 2: you may have noticed that for some Retail batch jobs, Microsoft has added the CanGoBatchJournal method in AX 2012 R3.

Note: the batch tasks which are to be enforced to run sequentially, need to be allocated to the batch server with Maximum batch threads = 1 setting specifically:

This business logic can then be used in the form of an additional batch task to pause the batch job for the number of seconds specified; here’s is an example for flow 1:

The cherry on the cake

Configuring the batch framework as described above adds another level of abstraction to the already powerful Retail CDX management framework in the Retail module. But when you top it off with a dedicated role center configuration, you can make a serious step towards Management by exception across the board. To stay with the example above, at business side you could implement an ‘exception cue’ for all orders which could not be directly fulfilled at import (flow 1A):

At IT management side you could implement an ‘exception cue’ for all (Retail) batch jobs errors. Clicking this cue will allow you to quickly descend into more details and solve the errors quickly and effectively:

I hope this has given you an impression on how you can create sets of interrelated automated tasks, whether having a business or integration background, to simplify the management of your complete solution and maximize comfort for your business and IT users.